How to build a large-scale LNG carrier

Demand for cleaner energy has grown at an unprecedented pace, as countries worldwide seek to reduce harmful emissions and explore new ways to achieve carbon neutrality and decarbonization. On the road from fossil energy to renewable energy, liquefied natural gas (LNG) has emerged as the key bridge, with particular applications for the marine industry’s ever-growing gas-fueled fleet.

An increase in LNG import and export terminals has led to investment in large-scale LNG carriers with cargo capacities of over 170,000 m3. These vessels are able to deliver liquefied gas to onshore LNG terminals, floating storage units and floating storage and regasification units.

The lifeblood of large-scale LNG carriers is the specialized technology that enables them to safely and efficiently deliver LNG. As cargo containment systems, reliquefaction & subcooling technology, and propulsion systems evolve, ship owners have a growing number of options for building efficient, environmentally friendly LNG carriers.

To function properly, cargo containment systems (CCS) onboard LNG carriers must meet two primary criteria. First, they must insulate LNG at a minimum temperature of -160º C so that it remains in its liquid state. Second, they must be efficient, limiting the rate at which LNG vaporizes, known as “boil-off rate” (BOR).

Two main types of CCS are currently available for installation onboard large-scale LNG carriers, each with its own advantages. 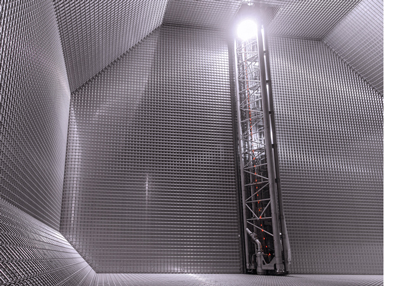 Membrane tanks have two thin membranes that act as barriers, supported by layers of insulation that offer low design pressure (<0.7 bar). These tanks include standard prefabricated panels made with reinforced polyurethane foam and/or glass wool and plywood, and two barriers. A thick inter-barrier space allows for lower temperatures, helping to keep the LNG at the required minimum temperature. The increased insulation thickness can enable a BOR as low as 0.07% of the cargo tank volume per day[1]. 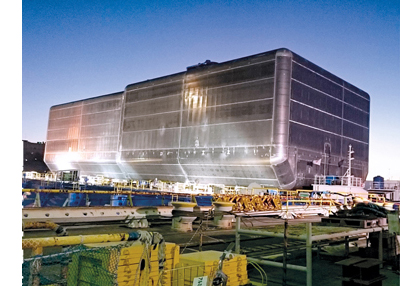 Type B tanks are prismatic or spherical tanks that are built independently from the ship and offer low design pressure (<0.7 bar). BOR varies based on insulation thickness and performance. Type B tanks are designed using the “leak before failure” principle and feature either partial secondary barriers or stainless steel trays in the lower part of the cargo hold. This allows the tank to recover LNG in the case of a leak.

Membrane tanks are generally preferred for standard LNG carriers, providing better volume optimization and insulation. Type B tanks are common in mid- to large-size LNG carriers, and have been installed onboard over 145 ships (including six vessels with prismatic tanks).

For an in-depth look at developing and existing CCS, see our insight on choosing the right cargo containment system

Providing liquefied natural gas (LNG) on a global scale was the shipping industry’s first step toward a low-carbon future. The last few decades have seen large-scale LNG develop by leaps and bounds, with massive investment and increased construction of LNG carriers and terminals. LNG growth is truly an object lesson for the rest of the energy transition: we’ve seen how effectively a mobilized shipping industry can turn en masse toward a cleaner fuel.

Delivering a maximum amount of LNG

LNG carriers are designed to minimize gas waste—the system is created to avoid producing either too much or too little boil-off gas (BOG). For ships with a higher BOR than needed for consumption by onboard engines or boilers, there are two options: either reliquefy or burn the excess in a gas combustion unit.

While reliquefaction equipment has long been used in liquefied petroleum gas (LPG) and liquid ethylene gas carriers (LEG), the technology is more complex when reliquefying LNG BOG. As a result, leading companies have developed a second wave of reliquefaction systems, which are being installed in most new LNG carrier projects today. Advanced BOG handling systems can help manage LNG vapors through subcooling and reliquefaction, maintaining optimal levels of temperature and pressure inside the CCS and reducing BOG waste. This enables ship operators and managers to safely deliver the maximum amount of LNG during each transfer.

Boil-off gas also plays a vital role in powering large-scale LNG carriers. Most modern LNG carriers have 2-stroke high- or low-pressure dual-fuel engines that use BOG from the CCS to power the ship. This means that a delicate balance must be maintained between the propulsion system and CCS to ensure that boilers, propulsion engines and auxiliary engines use the right amount of BOG.

In the case of insufficient BOG, LNG cargo either must be forced to produce boil-off, or fuel oil must be used as an alternative. An overabundance of BOG will lead ships to either reliquefy or burn excess gas. To balance out BOG production and gas fuel consumption, ship operators have often adapted their speed to produce the needed amount of BOG for traveling a given distance.

However, as shorter charter contracts have become the norm and spot trading increases, demand has risen for LNG carriers that can operate efficiently under a different set of criteria. Shipowners and shipyards must therefore be flexible, matching the right reliquefaction or subcooling system with evolving propulsion and cargo containment systems.

Crossing the Arctic: a milestone in LNG transportation

The development of large-scale LNG carriers capable of traversing the Arctic was a notable turning point in LNG transportation for the maritime industry. The groundbreaking YAMAL LNG project was the first of this kind, delivering 15 icebreaking LNG tankers between 2016 and 2019. Its successor will be the Arctic LNG-2 project, beginning in 2023.

Collaboration among ship owners and operators, technical experts, equipment manufacturers and regulatory bodies remains key to developing large-scale LNG carriers operating in Polar waters. Classification societies have a particular responsibility to ensure the safety and sustainability of ships traveling in a dangerous and environmentally sensitive area.

The role of classification societies

From the earliest developments in LNG carriers in the 1950s, classification societies have been working closely with industry players and regulators to understand nascent technologies, identify and address risks associated with the cryogenic storage and handling of LNG, and develop a robust yet pragmatic regulatory framework. Technical expertise with LNG carriers, gas-fueled ships and bunkering vessels enables class to support and enhance the maritime industry’s ongoing large-scale LNG operations.

Building on the hands-on experience with LNG projects and innovations in cryogenic technology, classification societies have developed dedicated rules and guidelines for LNG carriers and supported the development of the international regulations, notably the International Code of the Construction and Equipment of Ships Carrying Liquefied Gases in Bulk (IGC Code).

Across the shipping industry, LNG is considered the transition fuel to bridge the gap between burning carbon-intensive fossil fuels and the carbon-neutral and zero-carbon fuels of the future. While marine stakeholders race to meet industry targets for decarbonization, class will continue to support the safe and efficient global distribution of LNG for the next decade of shipping.