Jointly developed by Crain and its partner REEL (Rationnel Economique Esthétique Léger), the SW270 is a solid thick wing, fitted with a rear flap. Grids located on both sides of the wing section create a suction force that draws the air stream around the wing section from the outside to the inside of the wing. The wing is mounted on a structural foundation which contains the suction fan required to operate the system.

Based on the principle of boundary layer suction, the Suction Wing concept delivers a very high lift coefficient, which reduces the size of the device needed to achieve a given pull force. Thanks to the shape of the system, the drag remains moderate. Therefore, the lift-to-drag ratio provides a good performance in upwind conditions and for ships sailing at relatively high speeds, using the wind to propel the ship in combination with the main engine. Furthermore, the wing section can rotate around a vertical axis to adjust to wind direction and optimize performance. 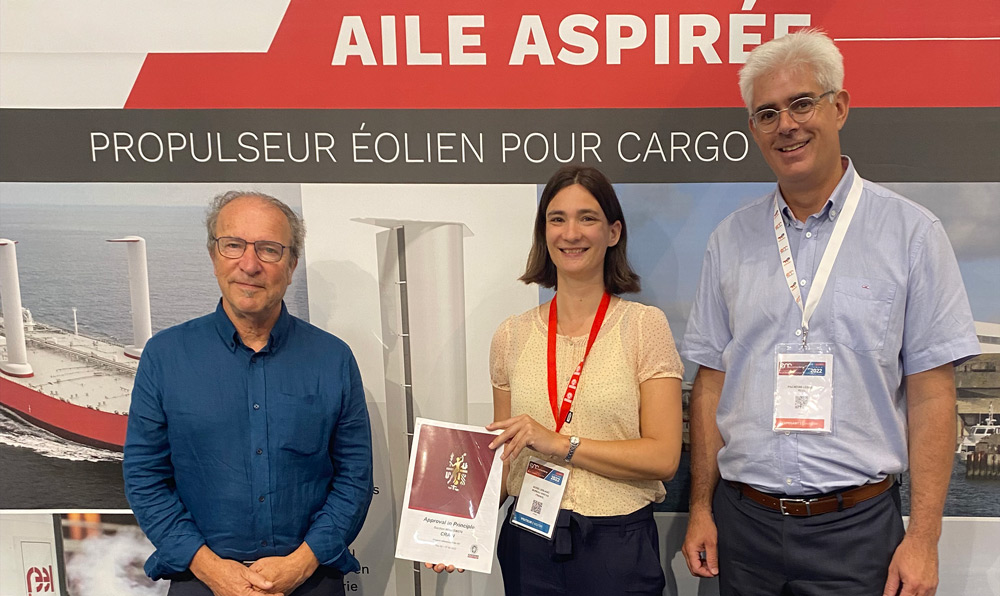 While the Suction Wing concept can be derived in a range of sizes in order to fit various vessel sizes, the device considered in this AiP was a wing with a span of 27m.

BV worked very closely with Crain Technologies from the earliest stages. The AiP was delivered in accordance with BV’s Rule Note for Wind Propulsion Systems (WPS) – NR 206. It follows a thorough assessment of the conceptual design, risk analysis, wind tunnel report, preliminary stability, loadings and the general arrangement. This AiP assures that this new technology can be safely used and is ready for the next phase of its development and installation on-board.

The suction wing concept appears to be a very promising option to help reduce greenhouse gas emissions from cargo ship operations. We are pleased to deliver this AiP to CRAIN, and we are proud to help build trust for innovative wind propulsion solutions, which are a key component of shipping’s decarbonisation transition. We look forward to seeing the system in operation.

François Lebailly, Business Line Wind Products Director at REEL, commented: “REEL is very proud to collaborate with CRAIN and BV on this innovative project. REEL, as a large industrial group, brings its expertise in the design of complex systems and its own industrialization and production capabilities. Wind is one of the main sources of free and widely available energy and a simple solution for the decarbonization of maritime transport. Our system will provide the best propulsion efficiency and CO2 reduction for our customers. Demand is scaling up, and we are pleased to contribute to this evolving market for a cleaner future.”

Philippe Pallu De Barriere, CEO of CRAIN, said: “Suction Wing SW270 is an innovative wind assisted propulsion solution that is suited for a large range of cargo ships. Developed using technologies already widely used by the naval industry, it delivers great power proportionally to its surface, and is easy to install and use on ships. Our collaborative work with the Bureau Veritas team based on their new Wind Assisted Propulsion rules enables us to move on to the next step, providing specifications for the industrialization of SW270 by our partner.”