Bureau Veritas delivers AiP to the MANTA, an innovative clean up vessel

The MANTA sailboat has been developed by The SeaCleaners to help addressing the issue of marine plastic pollution, with minimal environmental footprint.

Bureau Veritas, a world leader in testing, inspection and certification, has awarded Approval in Principle (AiP) to the MANTA, a pioneering vessel offering solutions for collecting and repurposing floating plastic waste in areas of high marine litter concentration, in the coastal waters of most affected countries and near the estuaries of major rivers.

This unique vessel, due to set sail at the end of 2025, was developed by MANTA INNOVATION, the integrated engineering design office of the NGO The SeaCleaners, with the support of naval architects SHIP-ST and LMG MARIN. 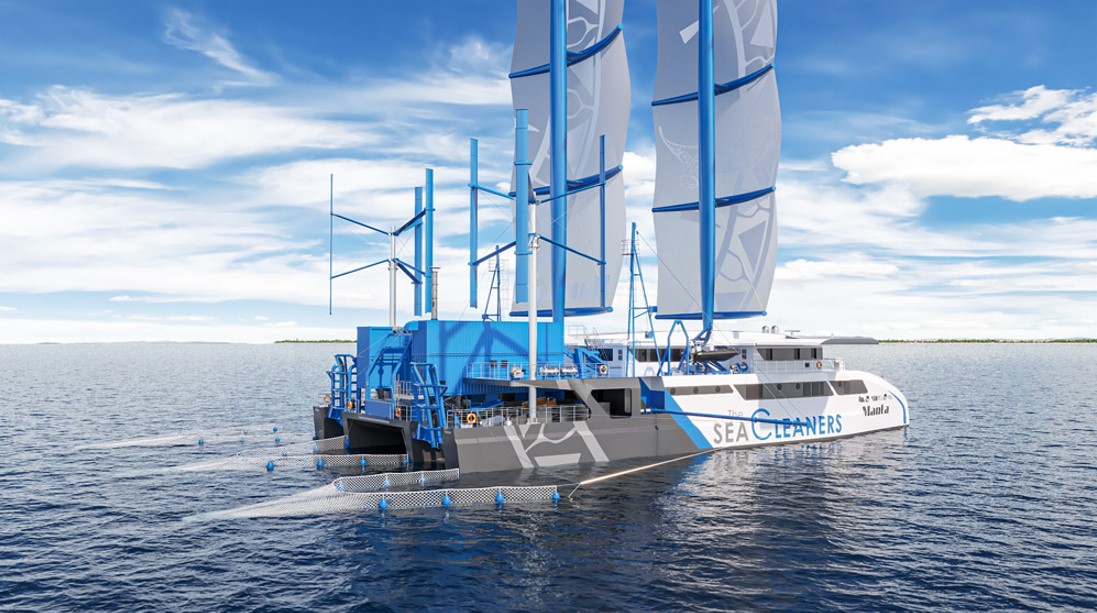 A 56m long, 26m wide and 62m high sailing ship, the MANTA will be equipped with an on-board factory including a waste-to-energy conversion unit. The vessel will be the first concentrated ecology and technology factory ship capable of collecting and processing floating ocean waste en masse before it gets fragmented, starts to drift and penetrates the marine ecosystem in the long term.

A beacon of Smart and Green Ship, the MANTA will be powered by a combination of renewable energy technologies to minimise its carbon footprint and achieve 50 to 75% energy autonomy. It will also serve as a state-of-the-art scientific laboratory for the observation, analysis and understanding of ocean plastic pollution and as an educational platform open to the public.

Bureau Veritas reviewed the overall structure, stability and security plans of the MANTA, based on risk mitigation around new technologies and requirements.

Yvan BOURGNON, President & Founder, THE SEACLEANERS, commented: “Marine plastic pollution is a global ecological disaster which requires urgent action now both on land and at sea. We are grateful that the MANTA was awarded the AiP from Bureau Veritas Marine & Offshore. This represents a major milestone for us and shows the solidity of our approach to tackle plastic pollution as we are about to enter a new development phase of the MANTA with the upcoming launch of the Call for Tenders to shipyards. More than 45,000 hours of study & development, involving 60+ engineers, technicians and researchers have led to this endorsement. It gives ourselves and our current and future partners confidence to look at the next steps.”

At Bureau Veritas Marine & Offshore, we share a drive to leave the maritime world in a better place than we found it. Bringing our expertise to pioneering projects, such as the Manta, is at the core of who we are and what we do. We help our clients to navigate challenges, providing practical advice. We look forward to the next phase of the Manta.