With more than 4 million participants in the Global Climate Strike this September, the message of citizens worldwide is loud and clear: industries must do their part to protect the environment and combat climate change.

The maritime industry is no exception, and regulatory bodies are working tirelessly to reduce shipping’s environmental impact – specifically by limiting ships’ carbon intensity[1]. IMO has developed a set of targets for reducing carbon emissions between 2020 and 2050.

By 2030, it expects a reduction of at least 40% in CO2 emissions per transport work[2] compared to 2008 levels, while also aiming for a 70% reduction by 2050. IMO also expects total annual greenhouse gas (GHG) emissions from shipping to be at least halved by 2050, as part of a push towards full decarbonization.

To meet these caps, maritime companies are exploring a range of clean fuel alternatives. From increasingly common LNG solutions, via “start-up” fuels such as LPG, methanol and biofuels, to less developed options such as hydrogen and ammonia - everything is on the table.

Liquefied natural gas (LNG) is now a well-known alternative fuel within the shipping industry. Producing almost no sulfur oxide or particulate matter emissions, it also boasts low nitrogen oxide emissions and GHG emissions between 7 and 22% depending on engine type. Additionally, LNG in combination with a combined cycle diesel/carbonate fuel cell could reduce CO2 emissions by up to 80%.

Despite these advantages, ships won’t achieve zero CO2 emissions with LNG alone. LNG is still a fossil fuel, and it poses the challenge of methane slip. Caused by incomplete LNG combustion in the ship engine, methane - a potent greenhouse gas - is emitted into the atmosphere, partly offsetting the CO2 emissions reduction. This is a key area for technological development, as experts are working to improve the design of engines to limit methane slip.

Another challenge with LNG has been limited bunkering infrastructure and higher CAPEX. However, thanks to huge investment in global LNG bunkering facilities - in particular outside the North European LNG supply stronghold - and favorable OPEX conditions, the price of LNG is falling, making it increasingly competitive with HFO. This trend is set to continue as global build-up of LNG bunkering infrastructure progresses.

As LNG gains traction as a clean fuel solution, greater numbers of LNG-powered vessels are being built; the global order book for 2019 lists 17% of newbuild orders (in gross tonnage) as LNG-powered. 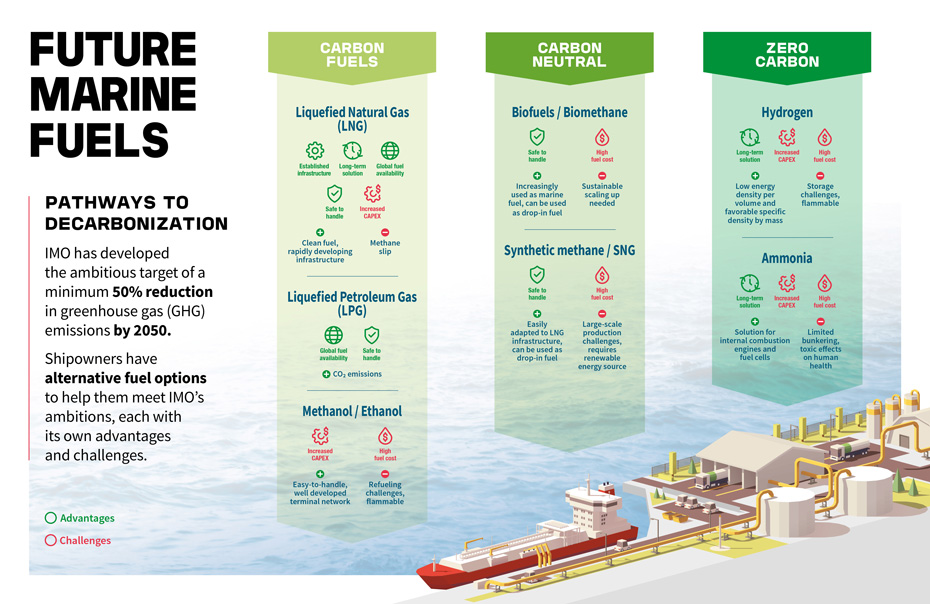 Liquefied petroleum gas (LPG) is a possible alternative to LNG. LPG is both widely available and easy to handle and store, leading to lower CAPEX than with LNG. Still, LPG presents a familiar problem: although it limits carbon output, it does not eliminate CO2 emissions, and while LPG terminals are operational worldwide, bunkering infrastructure is notably lacking. However, although current levels of LPG production are insufficient to make this alternative fuel a catch-all solution for shipping, it will certainly be part of the larger solution, starting with LPG carriers.

Methanol and ethanol present other alternatives to LNG, with similar profiles to LPG. As drop-in fuels, they are easy to handle compared to LNG, and benefit from a well-developed global terminal network. At the same time, bunkering facilities are limited, and methanol- and ethanol-fueled ships need to be designed and operated with special care, given the gases’ toxic and flammable nature. To use them safely, additional CAPEX is required for storage and handling. While the CAPEX gap is smaller than for LNG, fuel costs are less favorable when compared with LNG and LPG.

Biofuels are a carbon-neutral solution becoming increasingly available as marine fuel. Major maritime players have been testing them in response to growing social pressure to reduce shipping CO2 emissions. However, mass-scale production of biofuels is not sustainable, particularly since other industries already use biofuels. This leaves them in much the same position as LPG: a good partial solution, but not a panacea.

Synthetic methane/substitute natural gas (SNG) and bio-methane are another set of attractive options, as they are compatible with current LNG propulsion technologies. In theory, SNG and bio-methane can be carbon-neutral alternatives when used in tandem with carbon capture and fuel cell technology, and existing LNG fuel infrastructure can be easily repurposed to source both. However, making SNG carbon neutral depends on the availability of renewable energy, and production remains costly in the short term.

A carbon-free future with hydrogen and ammonia

Further down the line in the world of clean fuels are hydrogen and ammonia. Intrinsically carbon free, these fuels produce zero CO2 emissions when sourced renewably, and both are clean fuel solutions for internal combustion engines and fuel cells. It is to be noted than both fuels have a much lower energy density than traditional fuel oils; this needs to be accounted for in ship design and will impact costs. While hydrogen has a favorable specific energy (about 3x higher than that of fuel oil) its energy density is 4-8 times lower, depending on the hydrogen’s state. Ammonia, on the other hand weighs twice as much as fuel oil, but requires “only” three times the space to contain the same amount of energy

The long-term, long-distance onboard storage of liquid or compressed hydrogen remains a technical challenge that will be expensive to solve in the short term. So, despite the possible applications of pressurized or liquid hydrogen for transport, ammonia – which acts as a hydrogen carrier – currently shows greater promise as a zero-carbon fuel for shipping.

For ammonia, the processes for storage and transport are well established. Moreover, it is one of the most widely used chemicals in the world, with global production levels of around 190 million tons per year. It is therefore widely available, although marine bunkering infrastructure would need to be developed. In addition, safety issues associated with ammonia’s toxicity and caustic properties, which create the need for careful storage and handling, are to be addressed – ultimately through regulation.

As the clock keeps ticking, stakeholders are seeing a growing need to develop solid infrastructure and supply chains for clean fuels. Bureau Veritas is playing a significant role in supporting the development of IMO regulations, notably the IGF code, as well as industry standards for design, operation and bunkering. We are involved in various joint industry projects (JIPs) to assess technical feasibility and safety risks of alternative fuels – considering both thermal engines and fuel cells. We also support early adopters in developing and completing projects.